Hot August Nights: The Torrance Historical Society features extended museum hours every Thursday night through the end of August. The public is invited to stop by and explore some of the museum's collections that include one of the first Torrance Police Department uniforms, photos dating back to the Westin Ranch days, and a huge collection of high school yearbooks. 1-8 p.m. Thursday, and Aug 18 and 25. Call             310-328-5392       or visit Torrance Historical Society for more information.

Torrance was founded on May 31, 1911 by Jared Sidney Torrance and Associates by the purchase of 2,791 acres of land from the Dominguez Estate Company for $976,850. Susana Dominguez del Amo sold an additional 730 acres to Torrance for $350 per acre. This land was originally a small part of the Spanish land grant called Rancho San Pedro, given to Juan Jose Dominguez in 1784 ( See the History of the South Bay for a discussion of the early Spanish land grant ranchos). At its inception, this planned industrial town provided housing for 500 people.

In March 1912, Torrance had originally proposed that the new development be named "Dominquez". The post office would not allow the use of this name since there was already a post office with that name. On March 12, 1912, at a meeting of the board of directors of The Dominquez Land Company, of which Jared Torrance was President, this issue was discussed, with many variants of the name "Dominquez" discussed. Other names considered included "Southport" ,""Coronel,"  "Obrador," "Don Manuel" and "Industrial". Finally, over the objections of Jared Torrance, the board approved a resolution naming the new development "Torrance". The city was incorporated in 1921, and had a population of about 1,800 residents. 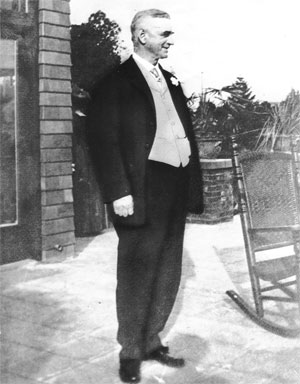 Jared Torrance, Founder of the City of Torrance

Frederick Law Olmstead, Jr., of Boston, is perhaps the foremost landscape architect of the country, and provided the landscape planning for the Palos Verdes Project. Millions of exposition visitors have seen and admired his work. Olmstead laid out the new industrial community of Torrance. On the broad empty cornfield he traced the lines of streets and boulevards, marked the limits of the business district, placed the industrial sites in the lee of the town, away from the prevailing westerly breeze, chose a knoll for the civic center, designated the sites of the city hall, library, auditorium and other public buildings, backed his civic center with a thirty-acre park and, fixing his eyes firmly upon the white peak of Mt. San Antonio at the horizon, laid out a broad boulevard straight through the business center toward the snowy crest. He devised winding contour streets and straight ones, provided diagonals, chose the trees, palms and shrubs for the parking spaces and told the engineer to go ahead. H.H. Sinclair, the chief, did go ahead, whipped the Olmstead plans into practical shape and broke the record for speedy, thorough construction.

This industrial city was to be the crowning achievement of Jared Torrance's long career filled with constructive effort. It was to prove that a worker decently, pleasantly housed upon an ample plot of ground of his own increases in efficiency and contentment, that these qualities are most important industrial assets and that their growth could be stimulated by laying the groundwork of a model city. To this end the individual home was fostered by him and protected by prohibiting the erection of any structure save private dwelling in the residence districts, by a complete separation of business houses from the home neighborhoods, by setting aside certain areas for livery stables, lumber yards, blacksmith shops and similar unsightly plants, by preventing the encroachment of the industrial zone upon the dwellings and by strict regulations, running with the land, against the manufacture or sale of intoxicants. In addition, Torrance gave the individual home site a minimum width of forty feet, and a depth of a hundred and forty feet, which was much larger than most home sites on the east coast.

The Pacific Electric Railway depot in Torrance at 1250 Cabrillo Avenue was completed in 1912 to serve Red Car passengers on this Torrance spur from the Gardena line.  The Depot is now a popular restaurant

The Pacific Electric Railway depot in Torrance is shown in this photo taken between 1912 and 1916.

By the early1950's, this had increased to 615 wells. In the late 1950's, however, oil production decreased significantly. While the first well in 1921 produced 900 barrels a day, daily production in the late 1950's was down to an average of five barrels per well. Finally, an edict was passed by the city requiring the removal of all wooden oil derricks by July 1, 1961. The final tower came down in 1963

For information about the history of the annexation efforts of Torrance from its founding as told by Sam Gnerre of the South Bay Daily Breeze see his excellent South Bay History Blog:

For more info, see my website at HISTORY OF TORRANCE